Daniel Flores : Well, my name is Daniel Flores and I’m the drummer and producer of this Swedish outfit and band called “The murder of my sweet”, a band which began back in 2007.   I started my music career back in 94 when I got my first record deal, since then it’s like 80+ albums, first band was when I was 15 and was called “Only alcoholics play death metal”, no album released as we played death metal… later I started Mind’s Eye, but that band is on ice for now.

Daniel Flores : 70’s rock like ELO, Pomp rock like Queen and progrock like Genesis. These are some of styles I like but I also enjoy Hiphop and Rastafari music. Right now I’m listening to many score movie themes.

Daniel Flores : Our band plays a mix (I think) of Symphonic pomp rock and cinematic rock with a huge amount of POP melodies. Our influences can varies from Death metal to Classic music but we also enjoy Jazz and musicals.

What about your promotion work and your relation with press at the moment ? Do you get a good feed back about your new album?

Daniel Flores : I try not to read the press so much, as it’s meant for the public. I hope the reviews are good, the some I have seen so far are great. The key is to evolve and keep making great albums, the day we stop and make albums for the public it’s going to be hell on earth, I make albums for my self and if someone like it, cool! If not, don’t mind to bugger off! 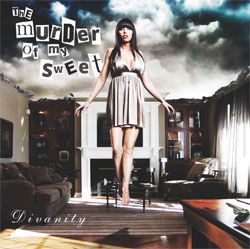 Daniel Flores : I would say, if you love music that is in the end in the score titles of a movie, you will love our songs. It’s meant to be very cinematic and to make you dream away. In the end there are some good songs in there and some that you might take to the grave.

Daniel Flores : In every little thing in life. Most lyrics I write are pretty cynical and have an agenda but Angelicas lyrics are more sensitive and emotional, almost graphical. The music I do, just comes to me all the time, it’s always been like that, I’m one of those guys that can write ten songs a day, though I only do it if I must.

Daniel Flores : Well, hard to pick one but “death of a movie star2 is very cinematic but I love “Revolution” the most I think, it has that un expected going on in the chorus whch are element that I love.

Daniel Flores : Yes, definitely, if you listen to most bands today, they have very little originality in the chord progress and melody lines, we on the other hand pay much attention to this and those chords are not you everyday stuff. Also the amount of time taken to the production is unbelievable as we took two years to fully develop it. I would like to see another band try an effort like this with our kind of budget….. forget it.

Daniel Flores : Yes, we have just signed with ITM (Lordi, Poodles) and we will hit the stage soon and promote our album, be there and be part of what we are about: PURE Energy and musical  development.

Daniel Flores : Please visit our website and support us if you like the album, it’s hard to survive without the fans buying an actual copy of the album. How can we know you are there if you download it? And let us know if you like it!