My name is Daniel Leigh and I sing in UK hard rock band NEW DEVICE. When I was 14 I chose to play the guitar and I started writing songs as soon as I had learned 4 cords. I then set to work finding musicians in my high school to rock with. I never intended on being a singer in a band but I seemed to be the only one who was willing to-so my career as a vocalist started by default! The first band I started was a 3 piece called ‘Cactus’. After ‘musical differences’ I started a new band called ‘Terminus’. In college I started a band called Sound Sculpture which later became Days In December. This was where I had my first experiences in a professional band. We toured countless times and had 3 successful releases in the UK and Japan. Days In December split at the end of 2007 and shortly after this NEW DEVICE was formed.

What are your own favourite styles and influences?

I was brought up with a very eclectic range of musical styles thanks to my parents and later what was introduced to me as a teenager. As a young boy I was surrounded by classic rock such as The Kinks, Thin Lizzy, Led Zeppelin etc. thanks to my father. I also took a great liking to solo artists such as Brian Adams, the late Robert Palmer and the late Michael Jackson. I believe that the combination of rock and roll and pop in my early years really laid the foundations for what I would write in the future. I was constantly surrounded by blues music such as B.B King, Albert Collins and early Fleetwood Mac in which I learned that “feel” played an integral role in music and it was none more prominent than in the blues.  In high school I fell in love with Nirvana and adopted a very strip down punk ethic to my musical tastes which still comes through in my writing today. Bands like Metallica, G’n’R, Skid Row, Bon Jovi etc. really hit home with me through high school and college and the soaring vocals and stadium sound was something that really turned me on.

What styles have influenced the band?

As a group we bring combinations of different styles to the table but undoubtedly the feel of classic stadium rock shines brightest in our material.


If I’m going to “big up” anyone here I’m going to tell you about someone who has impressed me a great deal in recent events. Our bassist Andy Saxton has eat, breathed and bled music for years now, both in the studio and on the road. He is a real road dog and loves playing, writing and recording music more than anyone I know. His ability and dedication to his instrument astounds me and I predict that he will be a very respected writer and producer in the near future in his own right. He has already written and recorded sound tracks for short films and has his own solo projects on the go and he teaches bass guitar with a deep understanding. He tells me stories about when he was touring with My Chemical Romance in his old band Cry for Silence, waking up in the foot well of their van, cold, aching, with a cigarette butt in his ear! Getting out of the van in the same clothes he has worn for days and laughing! He loves the music and everything that goes with it-and in today’s day and age, someone like him is very hard to come by! He rocks!

What about your promotion work and your relation with press at the moment? Do you get a good feedback about your new album ?

Takin’ Over has been very well received by the press. A term that keeps coming up is that we are “refreshing” and although our music harkens to the “classic” rock styles, we are bringing a fresh slant to it rather than simply being a “throw back”. 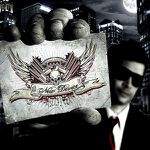 The mood of the album is one of pure passion. On it you will find songs with the message of unstoppable confidence, songs of hard love, songs of a highly sexual nature and of deep heartache and longing. If you want 12 tracks of killer rock songs that demand to be played loud and that you will want to play again and again then get this album. If you want an album that combines the classic styles of the great rock bands you loved in the 70’s, 80’s and 90’s  with our own modern New Device edge-get this album. If you are sick of all the pussy indi rock bands that are coming out in music now and want to listen to something with some balls-get this album.

I find inspiration for my lyrics and music primarily from within my own life. I have to sing these songs night after night on tour and so I have to have them mean something to me to keep the passion alive on stage for myself. Music and lyric writing is something that I don’t stop doing. I always write, because I am always being inspired-be it by my friends, family, women or people and situations that bring you to anger. I was very aggressive and angry in my early teens before I could play and write songs. I still get angry but I chose to direct my anger into my art rather than a fist into someone’s face.

This has never really been a concern of mine but as I have said I keep hearing the press and fans referring to us as “refreshing” and a “revamped model of a classic style”. Whether we bring something new to music or not is not my concern but producing killer rock songs is! I will say this though- although we don’t care about being innovators of a new sound, we certainly want to do things in a different way to our predecessors. By this I mean that New Device is not a band that does drugs or indulges in heavy alcohol abuse-members of the band do drink but not to the point where it affects our performance. We are in it for our art, which is our music and we aren’t willing to jeopardise our performance for something that we could do outside of being in a band. It’s tough enough being in this business and to keep afloat and have a successful career you need to have a clear mind and a healthy body.


What’s your favourite new track ? Why?

I recently became a fan of Shinedown and was really taken with their song “The Sound Of Madness”. The introduction is raw and powerful and full of guts and the chorus drop is right up my street-big cords and huge vocals-love it!

We recently finished a month long tour all over the UK which was immense! And we have some very exiting tours lines up in the spring that unfortunately can’t tell you about until the politics have been sorted out-sorry! We are now a well oiled machine! Our live shows are full of energy and power and we make sure that whatever goes down on record we recreate live!